Man Who Found Birds: In Which a Writer Confesses Her Sins

I naturally write long stories!  Mea culpa!  No matter how good my intentions are, this is something I cannot overcome!  "Monster Is in the Eye of the Beholder" (about 19,000 words) is the aberration.  The Termite Queen ran to two long volumes, but it never seemed long to me.  The Labors of Ki'shto'ba Huge-Head was planned as a three-volume series, but I'm chopping it into at least six moderately long volumes.  This works quite well because my termites' adventures are episodic.
But then we come to The Man Who Found Birds among the Stars.  It is a hopeless, unfinished sprawl, with a middle where I started improvising, bunches of characters (each of whom shouted "Hey, you, I've got a story of my own!"), and an experimental effort in a later part that I'm going to have to abandon and completely rewrite.
So why does this happen?  It happens because of the reasons why I write.  I want to express what's inside of me.  I don't write intending to produce a commercially popular book or to appeal to a particular group of people, like young adults or fans of a particular genre such as paranormal or horror or romance or even generalized science fiction, although MWFB does fall into that genre.  In fact, I don't really write for other people at all, although of course like any author I want my books to be read and relished. But I can't compromise my own way simply to make people buy and read the books. I can't write in a particular form on demand.  Therefore, I will probably continue on my path of sin.
So if MWFB is so imperfect, why have I decided to work at least part of it  into something capable of being published?  Well, I acquired one serious fan in the process of posting early chapters on this blog.  Those posts also received many page views, if that means anything.  People did seem interested.  I've had a few other favorable comments as well.  Maybe this book could actually be my break-out piece!
The book is cast as biographical fiction written to commemorate the 50th anniversary of the death of Capt. Robbin Haysus Nikalishin, who commanded the first mission to a nearby star system and while doing so made humanity's first contact with intelligent extraterrestrials.  So there's my signature nod to scholarship:  the book is really authored by Prf. Tania Barden of Oxkam University in the Islands of Britan.  For comparison, The Termite Queen is laid in the 30th century, when interstellar travel and contact with extraterrestrials has become commonplace.  In MWFB, you'll get an occasional aside mentioning how things were done differently 50 years before, in the 28th century; otherwise it's a quite straightforward narrative.  I purposely tried to write a more colloquial style than what I used in TQ or in Labors (my termites are quite formal little beasties, as I've said elsewhere).
Now comes the painful part of my confession: the facts about the length.   The first 37 years of Robbin Nikalishin's life has consumed about 780,000 words, and that doesn't even get him to the stars.  I'm working on reducing that awful length, but I think this early part of his life will require three or four volumes (still undecided).  My tentative titles are v.1: Eagle Ascendant; v.2: Eagle Falling; v.3: High Feather; and v.4: Survivor.  It would be nice if I could shorten vols. 3 and 4 enough to make only one volume out of that, called Survivor.  If you've been reading my posted chapters, you'll recognize that those titles derive from the "Prologue."
Volume One started at 179,173 words and after an initial cutting effort, it's now 175,203.  That's shameful!  I'm about to start a second pass-through, trying to look at each chapter objectively and determine if any huge chunks could be cut.  The best place to cut would be in the technical aspects -- my take on future fictional physics.  The problem here is, my fictional temporal quantum physics plays an enormous part in the unfolding of the plot, so I don't know.  I'm comforted by the fact that v.2 of The Termite Queen is 196,000 words, running to 572 published pages.  At least this one won't be that long!
Now you may be saying, if this book is worth publishing, then why don't you hire a professional editor to cut it?  Arrgh!  Then it wouldn't be my book any longer!  I don't care how much better it would be -- I would have to disown it!  So I'm going to plow ahead and we'll see what happens.  The cover will be a problem, however.  No termites in this book -- it's all about human characters -- and I'm not much good at drawing anything but termites.  I might be able to do something with eagles.  If not, I might have to get some professional cover art.
So please bear with me.  I think that in the long term you may just find this story compelling and captivating!  I know v.1 has the most exciting and suspenseful ending I've ever written for any book!

Here is a facsimile of the title page of the "original edition," published in 2849:

THE MAN WHO FOUND BIRDS AMONG THE STARS
A Biographical Series
Issued in the year 2849 as Part of the Commemoration
of the Fiftieth Anniversary of the Death of
Capt. Robbin Haysus Nikalishin
(10 May 2799)by
Prf. Tania Barden
Fellow, Brassnose/Queens’ College
Oxkam University
VOLUME ONE
EAGLE ASCENDANT 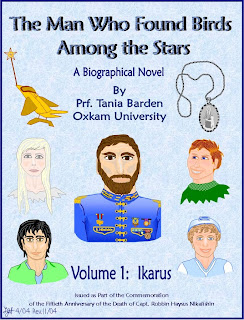 I decided to embarrass myself further
and post a cover I drew way back in 2004.
I got better at drawing faces as time went along, but these are not the best
and I have no intention of publishing with this cover.
Note that I originally entitled the early volume Ikarus.
That's Robbin Nikalishin in the middle, of course.
Otherwise, the characters are, clockwise from upper left:
Sterling Nikalishin (Robbie's mother)
Robbie's friend Kolm MaGilligoody (horrible -- eyes aren't anything like right)
Dr. Madeline Souray (the Project's Medical Officer)
Wilda Murchy (Robbie's most enduring friend)
At the upper left is Robbie's toy space plane
and at the upper right is Kolm's medal of Mairin and Jaysus.
Posted by Lorinda J Taylor at 9:11 AM

Email ThisBlogThis!Share to TwitterShare to FacebookShare to Pinterest
Labels: Editing, Man Who Found Birds among the Stars, Writing, Writing Progress