Fathers and Demons: Another New Review

At this point in time, Neil Aplin's new 5-star review of Fathers and Demons has appeared only on Smashwords.  I'm hoping he puts it up on Amazon soon.  Here is the review:

In Fathers and Demons; Glimpses of the Future, Lorinda J. Taylor develops the character of one of her most fascinating protagonists, the Captain Robbie Nikalishin, who despite constant mispronouncements of his surname conquers this as well as the traumatic initial journey into the depths of the galaxy from a previous novel to find himself strong enough to accept the offer of a second mission, whilst at the same time learning more of the nature of the remnants of religiosity in the 28th century, particularly the Jewish culture and faith, interlaced with a generous helping of ruminations on the father-son/mother-son relationships.
Perhaps an unusual juxtaposition for a story to start from, but Lorinda J. Taylor's imagination never strays too far from the unusual, and never fails to extract empathy and interest in equal measure from the reader. It is a concoction worth the sampling. Looking at the world through Robbie's eyes can be frustrating and indeed sometimes challenging, but never dull!
We await the next episode of the Nikalishin saga with anticipation, not a little dread but the hope of some success.

The "previous novel" that Neil Aplin mentions is my WIP The Man Who Found Birds among the Stars.  I'm definitely planning to publish the opening segment of that marathon opus as soon as I can fit it into my schedule.  At the moment I'm still working on the sequel to the series The Labors of Ki'shto'ba Huge-Head.  More information will be forthcoming.

Posted by Lorinda J Taylor at 1:28 PM No comments:

Email ThisBlogThis!Share to TwitterShare to FacebookShare to Pinterest
Labels: Book Reviews, Fathers and Demons, Man Who Found Birds among the Stars

TermiteWriter Is Being Interviewed on Internet Radio! 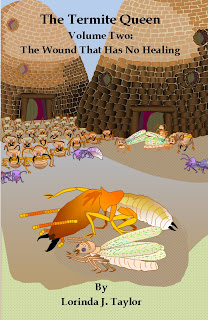 Annette Rochelle Aben kindly invited me to be interviewed on her program "Tell Me a Story" on the internet radio channel "The Magic Happens."  The interview will be live at 1:30 pm EDT, or you can access the Archive after the program airs.  Here's the URL for both the live broadcast and the Archive:

There is also a Facebook event running simultaneously.  The URL for this is

Furthermore
I've made the ebooks of both volumes of The Termite Queen and
v.1 of The Labors of Ki'shto'ba Huge-Head (The War of the Stolen Mother)
only 99 cents
at both Amazon and Smashwords from today through Oct. 25!
So you have no excuse not to get acquainted with my writings!

I hope you'll join Annette and me!  I'll try hard not to bore you!

Posted by Lorinda J Taylor at 2:33 PM No comments: