ALL SUMMER LONG
I'LL BE HAVING WEEKEND 99-CENT SPECIALS ON MY EBOOKS!
WATCH THIS SPACE TO LEARN WHICH TITLE
IS BEING FEATURED THIS WEEK!
So ... you missed out on the 99-cent special on
Monster Is in the Eye of the Beholder.
Shucks!
But the regular price is only $1.99,
so it still won't break your budget!
MAY 30-JUNE 2
THE TERMITE QUEEN, v.1:
THE SPEAKING OF THE DEAD

JUNE 6-9
THE TERMITE QUEEN, v.2:
THE WOUND THAT HAS NO HEALING


SYNOPSIS
"In the 30th century, an off-world expedition returns to Earth with a specimen of giant termite whose behavior suggests intelligence. Kaitrin Oliva, a strong-willed and ambitious young linguistic anthropologist, is charged with finding a way to access its unique form of bioelectric communication. However, the insect dies and the team members realize too late that they have unintentionally murdered an intelligent lifeform. A second expedition is mounted with the purpose of making first contact and reparations. Griffen Gwidian, the entomologist heading the expedition, is a complex man with a dark personal secret. He falls in love with Kaitrin and against her better instincts Kaitrin responds. The result is a love story by turns turbulent and funny, passionate, tender, and troubled. Meanwhile, civil discord is brewing on the termite planet. Mo’gri’ta’tu, the Queen’s Chamberlain, resents the power of the Holy Seer Kwi’ga’ga’tei and plots to assassinate her. She has engaged the services of an outland Champion, Ki’shto’ba Huge-Head, to fight this terrifying entity which has descended on them from the skies, murdered one of the fortress’s citizens, and abducted another. This alienates the aging Commander Hi’ta’fu the Unconquered, who is lured by the word-crafty Chamberlain into joining the conspiracy. At the very moment that the murder is about to be committed, the second expedition arrives at the planet … Discover the conclusion of the adventure in "The Termite Queen: Volume Two: The Wound That Has No Healing."
AUTHOR'S COMMENT
﻿
I got my idea for a species of intelligent termites way back in the 1970s when I first saw the documentary "Mysterious Castles of Clay," about the African fungus-growing, castle-building termite.  At the time I was writing heroic fantasy, but I was reading a good deal of science fiction and I was struck by the idea that an intelligent lifeform might evolve from similar insects on another planet.  They would retain many of their social insect characteristics while developing a language that humans would be unable to accesss.  A specimen of this lifeform would be brought back to Earth and a female linguistic anthropologist would discern that it was intelligent and learn to communicate with it.  When I returned to writing in 2000 after a long hiatus, I still had this idea in the back of my mind and I decided to pursue it.  The Termite Queen (a 2v. novel) was the result.
EXCERPTS FROM REVIEWS OF VOLUME ONE
"Author Lorinda Taylor takes the reader 1000 years into the future where planet Earth is radically changed by wars, pollution, revolutions, political upheavals, dark ages, and technology. Despite all, human society remains resilent and progressive. Humans remain human, with all their foibles and insecurities, striving for knowledge and understanding, having an abiding need for love. ... The inquisitive mind will find this an irresistible and intoxicating tale." -- Termite Tim [Timothy Myles, entomologist]
"Really great story, characterizations, plot, and brilliant descriptions of how language works. For all of these very positive reasons, I encourage any reader who is not daunted by the length, to jump in and purchase both volumes of Lorinda Taylor's great science fiction tale." -- Marva Dasef
"Volume 1 of The Termite Queen has a compelling story. As a lifelong fan of Asimov, I appreciate Lorinda Taylor's focus on one aspect her future rather the sensory overwhelm that is cyberpunk. The science in question is linguistics. The rapidity with which Our Heroine discovers the Big Secret is a bit unrealistic but excusable in lieu of 100 pages of slow and detailed linguistic analysis. The use of substitute sounds was brilliant. The romance plot did not engage me as much as the science, but that's a fault that lies in me, not in Lorinda's stars. The aliens are based on termites, and think like termites, not people. That's good." -- Marcus (Goodreads)
Posted by Lorinda J Taylor at 1:29 PM No comments:

ATTENTION!
ALL SUMMER LONG
I'LL BE HAVING WEEKEND 99-CENT SPECIALS ON MY EBOOKS!
WATCH THIS SPACE TO LEARN WHICH TITLE
IS BEING FEATURED THIS WEEK!
MAY 23-26
MONSTER IS IN THE EYE OF THE BEHOLDER (novella)
PURCHASE FROM AMAZON, AMAZON UK,
SMASHWORDS, BARNES & NOBLE,
AND OTHER ONLINE EBOOKSELLERS
ALSO ON SCRIBD 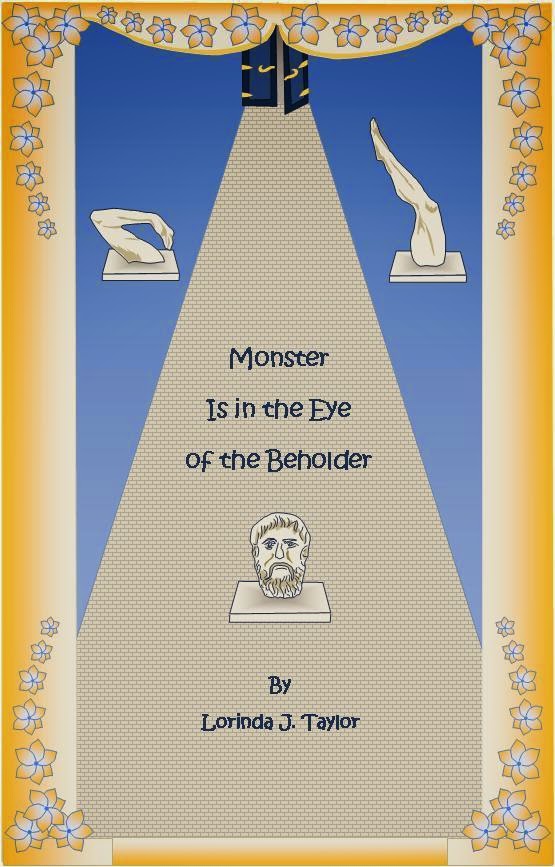 SYNOPSIS
"In this dark and edgy first-contact story, a team of anthropologists discovers a species of truly bizarre intelligent lifeforms called the Kal. The team consists of the leader, an experienced, highly respected female Professor of Xenoanthropology and Linguistics; a young female biomedical specialist; and a still younger male, an expert in alien artifacts. Each team member reacts in a different way to the Kal, building toward a disturbing climax and a conclusion with an unsettling twist of perspective."
AUTHOR'S COMMENT
This was the first book I wrote after I recommenced writing in the year 2000.  I had just bought my first computer and it made writing so much easier!  I had a very bizarre dream -- something that could have been terrifying, but instead it conveyed an aura of peace and light and provoked only curiosity and wonder.  I jumped out of bed and rushed to the computer and wrote down the dream before I could forget it, and I knew immediately that I had to write a story based on it.  "Monster Is in the Eye of the Beholder" was the result.  It was also the first piece I published when I began self-publishing, because it was short and made a good learning object.
EXTRACTS FROM REVIEWS﻿
"Lorinda J. Taylor's imaginative and entertaining science-fiction novella, Monster Is in the Eye of the Beholder, reminded this reader of Mary Doria Russell's The Sparrow (1996). Both works are first-contact stories that turn on what happens when human beings, acting with best intentions, behave in ways that cause catastrophic damage. Doria Russell and Taylor both explore the nature of good and evil, cultural difference, and prejudice, and both choose to tell their stories, for the most part, in framed flashbacks." -- Jack A. Urquhart
"I literally said 'Wow' out loud when I finished this book! Before I started it I had thought it was going to be a bit hard going, but it wasn't at all, it was very readable. I sat down on a Sunday afternoon thinking I would make a start reading the first few pages, but as it turned out I couldn't put it down and read it in one sitting. It's shocking and compelling, and has a moral message, but it's one that feels incidental rather than the story being contrived to bring out the moral point.
I've never read anything quite like this and it's not a story I'm going to forget in a hurry." -- Vanessa-Jane Chapman
"Stylistically, the work evokes what I would call "classic SF" writing and pacing. The early works of Ursula K. LeGuin come most prominently to mind--something like The Left Hand of Darkness." -- Athena Brigitte [Katherine Anthony]
"The Kal are among the most innovative and unexpected aliens I have ever encountered in sci-fi. None the less, this is not "gadget fiction"; as is generally the case with the best science fiction tales, it's the human side of the story which takes center stage, and that story is both believable and moving.
Get it, and read it -- you won't regret it! (And you won't forget it, either, not for a very long time!)" -- Christian Daddy [Stephen Lawrence]
﻿
Posted by Lorinda J Taylor at 9:28 AM No comments:

Email ThisBlogThis!Share to TwitterShare to FacebookShare to Pinterest
Labels: Monster Is in the Eye of the Beholder, Promotions, Special Offers
Newer Posts Older Posts Home
Subscribe to: Posts (Atom)