I casually went into Amazon this morning and lo and behold!  I had three new reviews, all by the same person!  The Termite Queen got a 4 star, The War of the Stolen Mother a 5 star, and Monster Is in the Eye of the Beholder a 2 star (more on that presently).
Here is the review of The Termite Queen (it's posted on v.1, but it covers both volumes (the bold type is mine):

"The two volumes here comprise a classic first-contact scifi story, and opposites attract romance, and a court intrigue "historical novel". At least. And they all flow together smoothly into a satisfying whole. The scifi part has the usual unexplainable "science" bits, but they are used judiciously as vehicle, not hinges for the whole plot. The real science -- of Linguistics, mainly, is accurate within its limits and well presented. The romance is credible and the intrigue is made new again by being adapted to structure of termite society and the realities of termite physiology (about which we learn a good deal as well). The only complaints I have are to the assumed panspermia (or whatever puts all discovered life forms on the terran tree) and the needless complex (from a linguistic point of view, not from a scifi novelist's) phonology of the termites."
This reviewer really likes The Labors of Ki'shto'ba Huge-Head series (which I consider to be the best thing I've written):

"This and the next volume are novel retellings of best of epic myths. Transferring from demigods to termites refreshes the perennial motifs and tales, while the mix of elements and the lively characters bring out the nobility and low cunning, the humor and the pathos of these episodes. The hero is all that that title implies, his companions the appropriate mix, complete with internal tensions and hearty cameraderie. And the narrator is just the right mix of keen observer and fussy pedant. And the tale continues into the fourth and soon fifth volume! Hooray!"
I'm also going to give you the 2-star review of Monster.  In fact, it's a good 2-star review - nothing insulting or nitpicking about it -- it's fair-minded and reasonable.  I concede that some people will react like this to Monster -- it will creep them out.  Yet others rave about the novella and give it 5 stars.  A matter of taste, I think.  Why don't you give it a try and form your own opinion?

"This is a very disturbing tale. As an allegory is quite dark; as a scifi novella it is ultimately wrenching. It starts with a twisted premise (even for an allegory) and then moves inexorably to its devastating conclusion. I like all of Taylor's other works (as I have said elsewhere) but this one creeps me out. Only the fact that Taylor is a very good writer (which makes the effect here more affecting) keeps this from a one-star (or a 0, if that were possible)."


Scroll down the sidebar to find where to purchase my books.
Posted by Lorinda J Taylor at 9:19 AM No comments:

Email ThisBlogThis!Share to TwitterShare to FacebookShare to Pinterest
Labels: Book Reviews, Monster Is in the Eye of the Beholder, Termite Queen (Reviews), War of the Stolen Mother

The House of the Spirits, by Isabel Allende; an Analysis 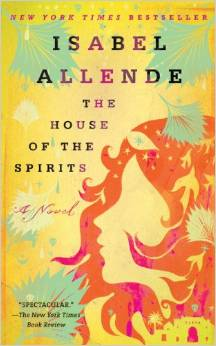 Barrabás came to us by sea …


This leads me to talk about the point of view.  This book is a prime example of alternating points of view.  Mostly it’s omnipotent third person narration, but occasionally an “I” crops up, and it isn’t always clear who is speaking.  In the very first paragraph of the book, we have this, speaking of Clara’s diaries: “She also recorded trivialities, never suspecting that fifty years later I would use her notebooks to reclaim the past and overcome terrors of my own [foreshadowing again.]”  We don’t learn who this “I” is – who is writing the book – until the epilogue.  But there are also lengthy passages in the first person and this is always the voice of Esteban Trueba, as in the asparagus allusion above.  In the epilogue, the explanation for this is stated.  “I began to write with the help of my grandfather [yes, it’s Alba who was the “I” on the first page]. … In his own hand he wrote a number of pages … ”  So this explains the change of voice.  It’s actually quite effective, even though I was under the mistaken notion that when a stray “I” turns up from time to time, it's always Esteban.  It’s effective because some of the most intense passages proceed directly from Esteban’s violent reactions and emotions, while the bulk of the book remains in the detached style I mentioned earlier.
The House of the Spirits was not difficult to read – the style is limpid and clear – but it wasn’t what I would call a “fun read,” either.  I noted in some of the excerpts from reviews at the beginning of the book, remarks were made about the book’s humor.  I find it to be a very black variety of humor.  For example, when Clara’s parents are killed in an auto accident, her mother’s head gets cut off and nobody can find it.  Clara goes out searching for it and finds it in the bushes.  The body is already buried, so she brings the head home and they keep it in the basement, along with the Barrabás rug, for years.  This may be called humor, but it’s not funny; I would designate it dark grotesquerie.
The House of the Spirits is fascinating, compelling, overwhelming, and unforgettable – certainly something I’m happy to have read.  I’ll probably try my hand at more magic realism in the future, but not immediately!  I need something lighter first!
One final thought:  the author begins the book with an epigraph, a brief poem by Pablo Neruda.  It really does characterize the theme of this great story – that the same stories are lived over and over again and thus no one ever really dies.
How much does a man live, after all?
Does he live a thousand days, or one only?
For a week, or for several centuries?
How long does a man spend dying?
What does it mean to say “for ever”?