The Man Who Found Birds among the Stars - Now Published! 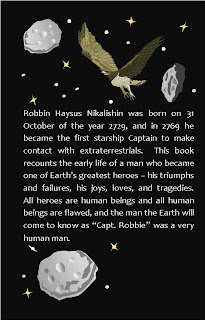 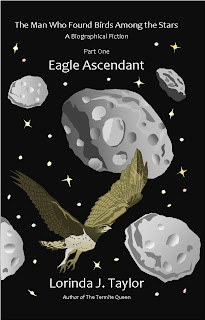 THE MAN WHO
FOUND BIRDS
AMONG THE STARS

Special price:
only 99 cents
until the Launch
Party

Launch Party to be held on Saturday,
January 14, 2017, on Facebook
You may win a FREE Copy!

You'll love this book
if you like biography and you like space heroes who have flaws, and
if you're interested in my version of the future history of Earth.

Like all my other books, I began this one years ago; I found older versions of the MS that were created in 2005, and I continued writing no matter how long it became.  After I began to self-publish my books, this one remained on the back burner because its length had gotten out of hand and it still wasn't finished.  I put up some samples on this blog and one person who read them was ecstatic about the piece.  I proceeded to send him the MS and he read the whole darn thing and urged me to publish it.  So -- I'm making a beginning on that, even though the entire opus still isn't finished.
A lot of you have been reading lines from Part One on the Twitter hashtag author games lately, and others have seen excerpts on certain Facebook events like Tidbit Tuesday.  I hope this has whetted your desire to read the entire book.
Also, some of you have read an extract from a later part of Man Who Found Birds, which I published as Fathers and Demons.  The current offering gives you the earliest history of the Captain who appears in that book.
Here is the description that you'll find on Amazon and Smashwords (an expansion of the blurb on the back cover above):

Robbin Haysus Nikalishin was born on 31 October of the year 2729 and ultimately became the first starship Captain to make contact with extraterrestrials.  This fictionalized biography, composed 50 years after Nikalishin’s death, recounts the first 31 years of the life of a man who is hailed as one of Earth’s greatest heroes. During this portion of his life he enjoyed many triumphs, joys, and loves, but he was not immune to failure and tragedy.  In 2761 a major space disaster completely changes the course of his life.  Whether it will be for better or worse is left for the reader to decide.
All heroes are human beings and all human beings are flawed, and the man the Earth came to know as “Capt. Robbie” was a very human man.

The Precepts: No. 6 in my New Series of Mythmaker Posts 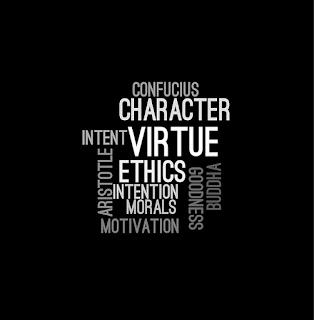 So how did I come up with these Precepts?  I’m really not quite sure.  I only know that somewhere back when I was composing The Termite Queen, or maybe even earlier (when I was writing “Monster Is in the Eye of the Beholder”), I started writing them down.  It’s almost like they just emerged from the void.  I knew I was creating a humanistic civilization and I felt guidelines were needed.  The only revision I’ve done recently involves the final four or five, which I reordered and renumbered.  This has caused some of the numbering to be off in my previously published books, I’m afraid, and if I ever update those books, I’ll fix that, but I figure nobody will pay much attention, since the whole list of Precepts doesn’t appear in those publications.  Everything should be correct in The Man Who Found Birds among the Stars.
The list begins by dealing with religions and gradually progresses to what it means to be human.  Most of the ethical material is in the middle along with the nature and value of science and art.  The order is pretty arbitrary, however.
All I'm doing in this post is presenting the list so you can get acquainted with the Precepts.  Remember, they are not meant to be laws or rigid rules – they are meant to be guidelines, capable of interpretation.  They are intended to make you think.   In subsequent posts, I intend to discuss the individual precepts, some in groups and some as stand-alones.  In the meantime, I welcome any comments or questions.

Precept No. 1: No one can know deity; neither can it be proven that it does not exist.
Precept No. 2: Humans have within themselves the ability to see beyond themselves and hence to act rightly without supernatural stimulus.
Precept No. 3: Since the purpose of deity for humans, or even whether it had a purpose for humans, is unknowable, it is incumbent upon humans to look within themselves and find the way to right action.
Precept No. 4: Humans must take responsibility for their own behavior, not seeking to put blame on imposed rules (of deity or human) or on fate, chance, or the intervention or willfulness of deity.
Precept No. 5: Humans will never succeed absolutely in achieving these goals; nevertheless striving for right action is its own purpose.
Precept No. 6: The closest humans can attain to deity is the symbolism of myth and art.
Precept No. 7: If a human have nothing else, it has its own soul, which must remain inviolate.
Precept No. 8: Science has a soul; technology is soulless.
Precept No. 9: Conduct your wars with words, not weapons.
Precept No. 10: The Right Way is universal; the Truth is parochial and divisive.
Precept No. 11: Institutions that grip souls merely for the purpose of gripping souls will always become destructive.
Precept No. 12: To achieve understanding of the unlike is a divine goal.
Precept No. 13: Love is as unknowable as deity, but every soul attests that it exists.
Precept No. 14: Let men and women make the vows of love in the music of the bedchamber, not with empty words.
Precept No. 15: Evolution has failed to structure the human organism for moderation; nevertheless the ability to recognize and strive for this virtue distinguishes human beings from other animals.  [Corollary:  The human organism is not innately a peaceful animal, but its ability to recognize and strive for peace sets it apart from other animals.] [Corollary:  Moderation promotes peace.]
Precept No. 16: Animals neither punish, seek revenge, forgive, nor blaspheme, nor recognize a need for any of these things.
Precept No. 17: Study history and learn from it, but look to the future and do not let yourself be trapped by nostalgia or revenge.
Precept No. 18: There are creatures on this planet [amended later to in the universe] who speak, form symbols, and share emotions; these may be called human.
Precept No. 19: The humans of our planet are all the same species; therefore they should care for one another and avoid the destruction of their own kind.
Precept No. 20: Since humans share their genetic heritage with all the bio-organisms of this planet [and of the universe – amendment added later], they should always seek to preserve life.


Previous posts in this series:
No. 1: What Can We Expect from the Future?
No. 2: How Will Humanity Lift Itself out of the Second Dark Age?
No. 3: Humans Are All the Same Species!
No. 4: The Mythmaker Canon
No. 5: The Valley of the White Bear