Children of the Music - Published! 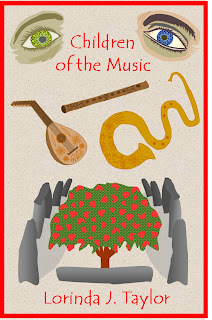 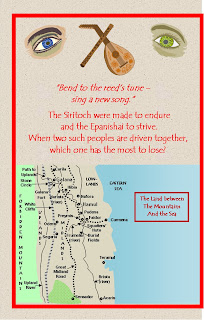 Here are the buy links:
Amazon (all countries)
Paperback on Amazon (US) (they haven't linked them yet)
Smashwords

I'm optimistic about the appeal of this book because I think it's the most accessible tale I've written so far.  Some of my books are a bit specialized and -- let's face it -- a bit difficult.  You should have a strong interest in languages and communication to really appreciate The Termite Queen, and you have to have the tenacity to plow through to the end of v.2 to get the most out of it.  Not everybody has done that and so they have missed out on a lot.  The Labors of Ki'shto'ba Huge-Head series is best read after finishing The Termite Queen, but those who have read the whole thing love it! "Monster Is in the Eye of the Beholder" is a shocker; lots of people think it's excellent (see the reviews on Amazon), but it turns off some people, and it's entirely different from my other books, which are much tamer.  Fathers and Demons is a piece of weighty speculative fiction containing a long discursion into the Jewish religion as well as an absorbing psychological study of a troubled Rabbi and a disturbed spacefarer.

So what makes Children of the Music different?  The length is moderate (Smashwords lists it at 122,000 words, but some of that is Character Tables and an Afternote by the author (me!)  It's laid in a world of medieval cultural level, and the genre can only be called fantasy, although magic is restricted to prophetic utterances and the strange effect the Golden-Eyed Siritoch have on the Epanishai, the invaders of their land.  Back in the 1970s when I wrote this book, I called the genre the "realistic treatment of an imaginary world," which is what I considered LotR to be.  I had no knowledge of the term "constructed world" at that time; today I would probably say "realistic treatment of a conworld."
Realistic treatment means that the characters are recognizably real -- you can relate to them as human beings no matter whether they are good guys or villains, Siritoch or Epanishai.  The characters are admirable but also flawed.  And there is a lot of irony -- both people honor the God of Life but in such radically different ways that, as I say on the back cover, "When two such peoples are driven together, which one has the most to lose?"

But there is another reason you should enjoy this book: Its tone is lyrical -- smooth, poetic, flowing ...   You should simply begin reading and let the sound of the words and the movement of circumstances flow through your consciousness and captivate you.  It affected me that way when I first read it after hardly thinking about it for 30 years (the odd thing is, I barely remember writing this book -- spooky!)  And the characters evoke so much empathy -- my favorites are (in Part One) Himrith the Headman's wife,  the pivotal characters of Leys and his great-grandson Nebet, and of course Daborno, the Chieftain of the invaders. In Part Two, you have to love Ondrach the shepherd who rebels against the circumstances of Siritoch existence; his wife Lisarith, who grows in stature as the book progresses; Saremna the willful child of the Epanishai; Cumiso the Chieftain of Galana; his brother Sembal ...

I'm going to end this with an extract to illustrate what I meant about the lyrical flow of the text.   I hope you enjoy this sample and choose to immerse yourselves in the entire book.

From Chapter 15 (The Makers of Music) Ondrach and his family have gone to the village of Preymis to earn some money entertaining the Mayor and his cohorts on his wedding anniversary:

I could quote a whole array of passages to illustrate
why I think you'll relish this book, but I have to stop.
Please do pick up a copy!
Ebooks are only $2.99!
And come to my event if you're on Facebook!
There will be prizes of free books!