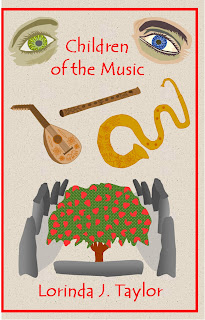 
I haven't updated my progress on publishing Children of the Music since May!  I'm happy to report that I'm close to considering it ready and will try to publish it before the end of August.  The book was meant to be a prequel to a much longer fantasy, which I never completed and do not plan to complete. This means that the prophecies uttered in Children leave the reader with a lot of unanswered questions.  I have been writing an Author's Note to set at the end of the book, explaining what was meant to happen in the larger work.  I'm going to quote parts of the Author's Note here (without giving away anything important about Children!) and add a few comments that I cut from the Note.

The “big story” was entitled To Sing with the Wind (a title I never especially liked) and it grew out of my fascination with the immortality of Tolkien’s elves.  I began to wonder – what would it actually be like to be immortal, especially in a world also inhabited by mortals? To explore this, I created an immortal race of my own called the Demrai, who fell victim to hubris, dominating and mistreating the “inferior” mortal peoples of the world who were supposed to be under Demran care. Their god (Dar) punished them by mewing them up in the mountains, unable to find a way out.  However, they were promised a Liberator who would come when they were worthy and guide them back into a life in the larger world. Simultaneously, all mortals were imbued with a sense of horror toward the spine of mountains that bisects their land, ensuring that there would be no accidental contact between mortals and Demrai.

Now a few words about the difficulties of creating a race of believable immortal beings.  For example, if Immortals propagated at even a slower-than-human rate, they would ultimately overrun the earth.  There had to be a way to kill off some of them.  Furthermore, what would happen to Immortals who were maimed in some way?  Would they simply regrow a severed hand or an eye?  My invention of the Demrai predated Highlander, but the writers of that motion picture and series had to deal with some of these same problems.  Highlander-style Immortals are sterile, so that fixes the propagation problem.  And as we all know, they can die if their heads are cut off.
My Immortals didn’t get off so easily.  The only way for them to die was to will their own deaths.  Life can become very tedious if it has no end (remember the song in Highlander “Who wants to live forever?”)  Depression would surely have been rampant among the Demrai, especially since their lives have lost all purpose during their separation from mortals.  When their Liberator finally appears, their numbers are in a dangerous decline.
Several dilemmas are solved by the suicide concept.  What happens if an Immortal is buried in a landslide?  Would this person still be alive if he or she was disinterred thousands of years later?  Such a situation would surely be unendurable, and a person in this situation would undoubtedly choose to end his or her own life.
And what about physical damage?  In Highlander: the Series it is made clear that severed limbs of an Immortal don’t regrow and that if the voice box is damaged, a glorious singing voice can be destroyed.  In my version one of the main characters is a blind Demran priest.  But I never tackled the question: What would happen to a Demra is his or her head was cut off?  Or if he were chopped into a hundred pieces?
I remained fixated on immortal beings for years.  I couldn't seem to come up with any other theme, even though I had already mentally stored away the concept of a race of giant intelligent termites.  After I abandoned To Sing with the Wind in the late 1970s, I invented a new world with another version of immortal beings.  The series, laid in a much more fantastic world with more fantastic beings, was to be called The Wizards of Starbell Mountain.  I did manage to complete the first volume, but later efforts also fell victim to the improvisation virus that had doomed Wind.  Anyone who is interested can get a taste of this world in my novelette “The Blessing of Krozem,” which is perpetually FREE on Smashwords.  It was written as a Prologue to the Starbell Mountain series.  Someday I might look into publishing that first volume.  But don't hold your breath. 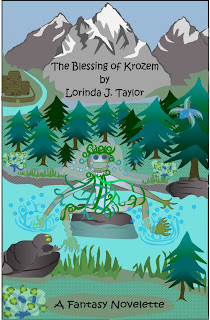 Email ThisBlogThis!Share to TwitterShare to FacebookShare to Pinterest
Labels: Blessing of Krozem, Children of the Music, Highlander, Immortals, Publishing Progress, To Sing with the Wind, WIPs, Wizards of Starbell Mountain

ALL MY BOOKS ARE HALF-PRICE
THROUGHOUT JULY, 2016
AT SMASHWORDS

SEE THEM ALL HERE:
https://www.smashwords.com/profile/view/TermiteWriter
CLICK ON THE BOOKS YOU WANT
AND USE THE COUPON CODE AT CHECK-OUT!

IT'S SO SIMPLE A TERMITE COULD DO IT! 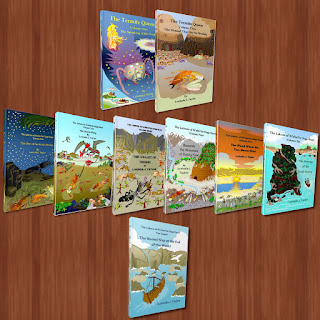 Posted by Lorinda J Taylor at 9:02 AM No comments: