Review by Audrey Driscoll of The Blessing of Krozem

Excellent description of what I was trying to do in the book!  You may recollcct that I wrote this back in the 1970s, so it's quite a bit different from anything I've written in the 21st century.  A couple of comments...  I'm pleased that Halrab came across as a sympathetic character; I certainly wanted him to be.  This book was written after Children of the Music, which is laid in a world much more like our own = many fewer strictly fantasy elements.  Somebody who read it criticized it for that.  So with Krozem, I purposely tried to make the world more fantastic, more magic oriented, and highly colorful.  I found quite intriguing Audrey's comment that she envisioned Ziraf's World as painted on silk scrolls.  However, I like Children of the Music just as much, personally.

Lorinda J. Taylor's stated goal is "to write compelling fiction that delivers an emotional impact and leaves her readers with something to think about at the end of each story." She has certainly done that with The Blessing of Krozem.Who wouldn't want to become immortal? Especially in a body that remains forever in a state of health and fitness. That is the gift bestowed on the priest Gilzara, one of the central characters of this book. It comes with the power—indeed, the obligation— to make others immortal as well, and with the expectation that the power is used wisely. But the gift coincides with a great loss for Gilzara, because his wife, Javon, refuses it and dies.The creators of the world in which the story takes place gave humans free will, but also trick and test them. Because of this, the gift of immortality becomes a curse for Gilzara, a great responsibility to which he believes himself unequal. And as the only immortal human in the world, he is desperately lonely.The other main character of the book is Halrab, a young apprentice priest whom Gilzara meets decades later, after much sorrowful wandering. Halrab is practical and optimistic, while Gilzara is a tortured soul. The establishment of friendship between the two takes many twists and turns, and constitutes the greater part of the story. Halrab is a sympathetic character. I could identify with him as he solved problems, made choices, and dealt with Gilzara's many anxieties.The setting for this story is Ziraf's World, described in the author's Afterword as "a fantasy creation in a galaxy far, far away from our own planet." The world is sort of like Earth, but also quite different. The sun rises in the west and sets in the east. Blue is the planet's dominant colour. The mountains and even the moon are blue. So is the race of humans to which Gilzara and Halrab belong, although there are rumors of other human races in distant lands. Indeed, this world is full of colours—stars in shades of green, red, purple, and yellow, trees whose blue flowers open by moonlight, and a wealth of other plants and animals, each with distinctive names and characteristics. It's a mountainous region, and the highest mountain has the captivating name of Starbell. I loved this aspect of the book.Another group of characters are the Troil, mostly incorporeal spirits attached to winds, waters, caves, and other natural features. Several of them play key roles in advancing the plot. They are rather charming individuals, whose appearance and ways of expressing themselves add an element of lightness.As with Taylor's other books, this one includes a constructed language (conlang). I discerned some of its conventions as I read, and there is a glossary at the end. It reinforced the impression of an alien world complete in itself.

For me, the first two-thirds of the story read like a legend set in China, with its communities of priests, mountain and forest shrines, and mentions of distant and powerful deities. I envisioned the plot as though painted on silk scrolls. In the final four chapters, there is a greater degree of tension and immediacy. Crucial revelations are made, and Gilzara either succeeds or fails (I'm not saying which!) in using the blessing with which he is burdened. I could not imagine, when I started reading, what the outcome might be. The ending was satisfying but the story did give me a lot to think about, as its author intended.

In case you're interested,  here's the Amazon link to Children of the Music: http://amzn.to/2f31c2Z 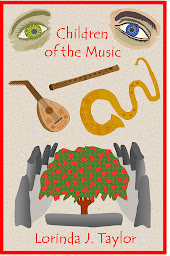 Posted by Lorinda J Taylor at 8:16 AM

Email ThisBlogThis!Share to TwitterShare to FacebookShare to Pinterest
Labels: Blessing of Krozem, Book Reviews, Children of the Music